Can extremely debilitating neurodegenerative disease Dementia. It is a disease for which a cure hasn’t been found yet – it is a desperately underfunded area of research and as such, any progress made can and will be extremely exciting for all dementia and potential dementia sufferers. Recently, a ‘wonder-drug’ developed by researchers is anticipated to stop all neurodegenerative brain diseases, including Dementia.

In more detail, two new drugs have been developed and tested on mice identified with neurodegeneration – why this development is exciting is that the drugs are suitable to prevent the death of brain cells whilst avoiding substantial damage to humans – something which hasn’t been possible in the past. Until now, there hasn’t been any identified drug that has successfully stopped the process of neurodegeneration in human beings without causing other associated health risks.

For example, in 2013 a breakthrough discovery was thought to have been made by Prof. Giovanna Malluci (MRC Toxicology Unit in Leicester). The drug discovered prevented the death of brain cells however its side effects were catastrophic in regard to human organs.

The study, which was funded by the MRC, Alzheimer Drug Discovery Foundation and the Alzheimer’s Society, was published in the journal ‘Brain’. 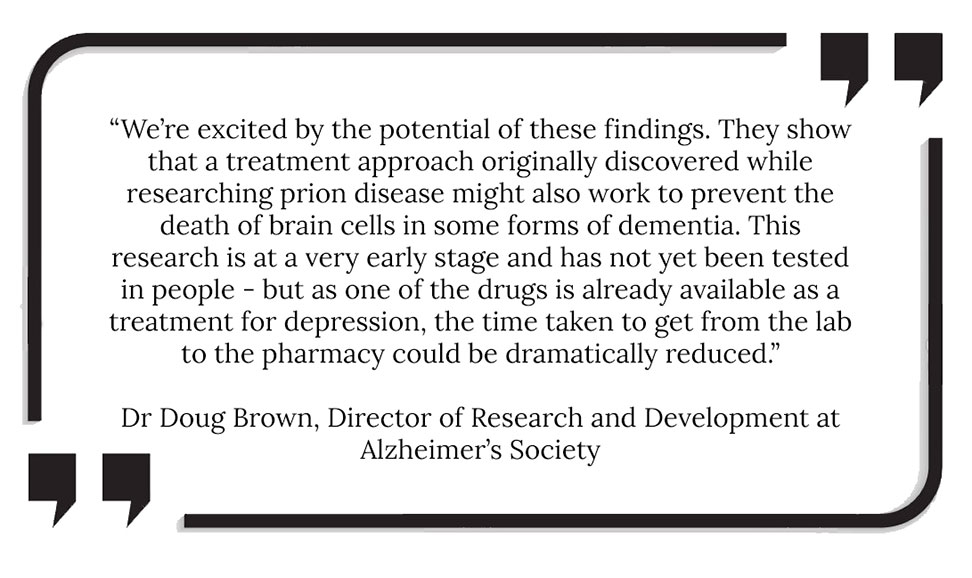 How would the new drug work?The drug aims to delay the brain’s natural defence system that actively impairs and starves living brain cells. When a virus infiltrates a brain cell, viral proteins are produced. The brain cells automatically react by reducing all protein production to stop the virus’s expansion. Most neurodegenerative diseases produce defective proteins that also activate the same automatic defence, which is the shutdown of the entire protein production. This defence process leads to the starvation of the brain cells, which can cause the destruction of movement, brain memory and can even result in death. The new drug would stop the brain’s natural defence mechanism through a particular compound and therefore hinder the death of brain cells. Further conducted studies show that the same approach and methodology could stop multiple degenerative diseases. The compound is toxic to the pancreas, but these findings are still a crucial stepping-stone for the development of new drugs.

What exactly is Neurodegeneration?

As for a timeline, Prof. Malluci hopes to get valuable results on the efficiency and safeness of the innovative drugs through human clinical trials by latest 2020.

We at Harley Street Care are beyond excited about the recent findings and are incredibly honoured to support Alzheimer’s Society who has been and continues to be incremental to this research process. We would love to see further institutes supporting and subsidising studies in this area.

Collectively, we all can create meaningful change and speed up the process of discovering a cure for neurodegenerative diseases. We hope to get your support by attending our charity concert #SimpleGifts in aid of Alzheimer’s Society.

Music Therapy in London and across the UK